BRENTWOOD, TN (July 2, 2018)—The EHS Daily Advisor®, in conjunction with sponsor the 5S Store®, has released a new research report, 5S and the Visual Workplace. The report is based on a 5S survey launched in April 2018 that polled 520 environmental, health, and safety (EHS) professionals regarding how their organizations are using the 5S system, where visual controls such as red tag area signs, shadow boards, and site boards are used to improve safety by making information readily available to employees. 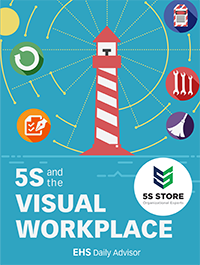 The pillars of 5S are Sort, Set in Order, Shine, Standardize and Sustain. Many are taking these principles a step further to include Safety—a sixth S!

Highlights from the survey results include:

About The 5S Store®

From their humble roots in the town of Pepperell, Massachusetts, The 5S Store has grown considerably. The company has outgrown the original home office space, moved into a bigger office park, and its expansion continues across the United States.

Look for The 5S Store, coming 2018 to the Levittown/Philadelphia, PA area!